I’d like to use logseq as an outliner, like one can use Word (in the good sense now).

It should render as: 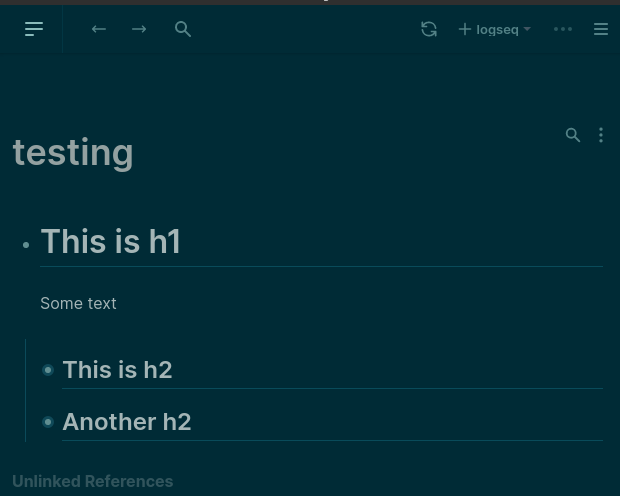 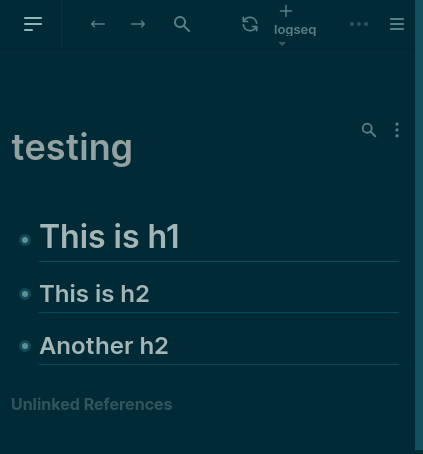 Note, that this rendering went through a great progress!

However, if I format the text in Logseq, the markdown file turns to this:

Could I somehow produce bulletless headers? Or at least could we have rendered the first markdown sample “right” (so h2s are under h1?)

You could render the above H2, H3, H4, etc with increasing indents using Logseq custom.css feature. You can have them even bulletless (actually transparent invisible bullets for UX reasons). I’m not expert in that, but the guys in Logseq Discourse #custom-themes are.

I am not concerned about the style of the headers, but the behaviour. If you fold h1, all content should be folded.

I am not concerned about the style of the headers, but the behaviour. If you fold h1, all content should be folded.

That was how Logseq treated # in versions 0.1.x. In those versions Logseq treats # headings as outline blocks.

However since version 0.2.x, Logseq use - list items as outline blocks. Folding top level - blocks will fold all sub-blocks.

Mmm … How do you see Logseq should render indentations (and folding) of the following mix of # blocks and - blocks?

Mmm … How do you see Logseq should render indentations (and folding) of the following mix of # blocks and - blocks?

On the writing side:
If you convert a bullet to header, all parents should be converted to corresponding headers. (h1, h2, h3, based on the actual structure)

I would like to thank @sabre23t for this comment which shows it is possible, although fragile, to write ‘freeform’ markdown in Logseq right now.

That looks doable for Logseq to my non-developer eyes. In fact I think that is what the Markdown document standards specify [1]. The markdown - or * bullets list items are subservient to the headings hierarchy. The unordered or ordered list items restarts relative to every # heading.

Is it really doable @tienson ?

Mmm … @pihentagy perhaps your proposal on these # headings outline hierarchy deserve its own feature request thread.

do you expect the result to be

Logseq v0.1.x treated these '#` headings as hierarchy with H2 parent of H2.2 parent of H2.2.1, displays them indented to show hierarchy, and when folding H2 all the childs blocks are folded too. @pihentagy example in reply to my question request the same.

The visual display indentations of these parent-child hierarchy is a side/display issue. The fundamentals of markdown Headings is that they are a hierarchy, more often displayed without overt indentations, but reflected by size of the headings instead. Such headings hierarchy are more clearly seen when automatic heading numbering are shown (like I used in the example, H2.1 is a child of H2).

However, current Logseq v0.2.x treats these # headings all as top level siblings.

I’m for what @pihentagy proposes.

I agree on the general idea but I choke on specific details, given your example :

this is how it’s rendered in typora 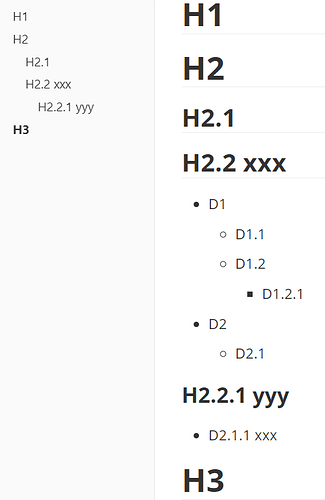 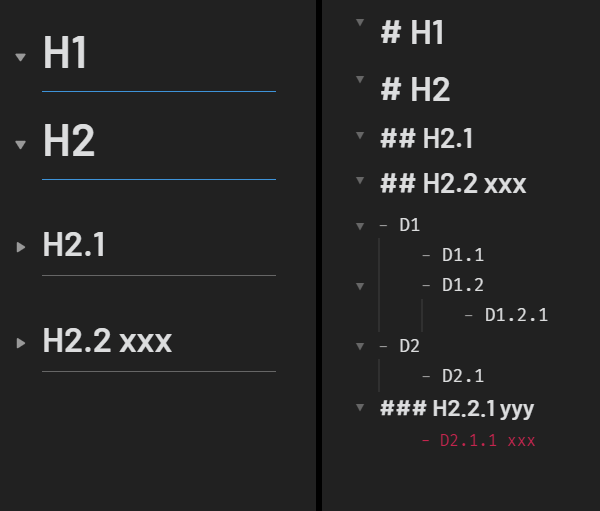 Why two tabs? Because that defines a 3rd level “-” block in Logseq. Also I wanted to see what Logseq do with it after a # block, and what @pihentagy thought it should do. I’ve tested in Logseq v0.2.5 and found that it treats ### H2.2.1 as top-level, and make - D2.2.1 as 2nd level (not 3rd). May be because Logseq doesn’t allow a two level jump between blocks. Logseq tab command UI/UX does enforce that too.

Also because GFM Markdown specs specifically allow such markup and describe how it should be rendered.

Good catch. You’re right. I think @pihentagy made a mistake in his example there.

when we input text in logseq, this rise a lot of ux questions

I wasn’t going to touch that (yet). I was concentrating mainly on Logseq interpretation of # and - blocks within a markdown file.

There are a few ways to take care of the UX for this. The simplest is just literally enter all those markdown formatting on input, just storing them as is. That seems to be what current Logseq do.

how should we differenciate between ### heading and - ### heading or (tab)- ### heading) since we do not explicitly type - in ls markdown, but only use indent/outdent ?

Current Logseq UX defaults to creating - block. It also provide /h1 command to turn those block into # block if needed. To go the other way just delete the #. Seems reasonable UX to me.

There are so many interesting thoughts here that it seems important to me to sort them out a bit.

I am not concerned about the style of the headers, but the behaviour.

What I don’t want is for Logseq to lose its outline capabilities in favour of free text. But a clever combination of both capabilities would be interesting.

Good catch. You’re right. I think @pihentagy made a mistake in his example there.

ok : ) this solves part of my initial confusion as you both seemed to agree on the output.

Why two tabs? Because that defines a 3rd level “-” block in Logseq. Also I wanted to see what Logseq do with it after a # block (…) Also because GFM Markdown specs specifically allow such markup and describe how it should be rendered.

thanks I was wondering what was the expected output, in fact this markup is working but it’s rendered as a code block in most md editors

The simplest is just literally enter all those markdown formatting on input, just storing them as is. That seems to be what current Logseq do.
as you noted in current logseq, there are currently two behaviors for headings:

the request to have headings acting as hierarchical markers too (as in most markdown editors) would alter the paradigm as it implies that - dashes and tabs become relative indentations (relative tio their heading’s own indentation), as highlighted in your examples.
so in this case :

but if we add a new heading on top , all levels are offset

so the level of indentation of the raw file (tabs) doesn’t match the ‘actual’ level of of the tree structure (and this is disregarding more complex cases with ### h3 in the middle etc… which is one of the issue mentionned by @ChrisVn :

just to make it clear : I’m not trying to embarrass with trick questions, I’m genuinely wondering what is the expected behavior and how this should be solved.
is the heading structure more important than the indentation ? (which goes againsht the concept of an outliner imo) or what rules should apply ?

What I don’t want is for Logseq to lose its outline capabilities in favour of free text. But a clever combination of both capabilities would be interesting

(i) Users who want # Headings hierarchy can use that exclusively.
(ii) Existing users of - Bullets hierarchy can also stick to using that exclusively including - # bullet with headings blocks.
(iii) Hardy users, long document writers, experimenters can go the mixed # and - blocks ways. Including the intricasies of relative indentations of - bullets under # headings. Note relative indentations intricasies already applies now in v0.2.5; where all # headings are considered top level.

The following is raw results of my exploration in MD format. Cut&paste into a Logseq MD file. My main interest is to see how typical usage of headings in markdown files can be incorporated in current Logseq v0.2.5 and/or any needed modifications. Seems to me it’s already reasonably useable from the example below.

Then we would have the behaviour of outliners in the outline blocks and a pure Markdown behaviour in the text blocks.

Current Logseq v0.2.5 only recognizes two types of blocks in any Markdown files and I see it behaves as follows …
(1) Starting with - or - # are dash bullet or dash heading blocks.
(2) Starting with # are heading blocks.
(3) All other “text” blocks (list, paragraph, code blocks, tables, links etc) will be included in either above two preceding blocks.
(4) If there are any “front matter” before the first - or # block, it will be displayed as the first block in Logseq.
(4a) If it contains recognized front matter (--- or property:: etc) it will remain as front matter (displayed in black background) after edits.
(4b) If it doesn’t contain any recognized front matter, it will be converted into a - block.

So there are no “text blocks” as such. And may not be necessary to have so too, as per my example in previous reply. I’m interested to see any typical “non-outline (freeform) text” that is not easily accomodated by the above though.

thanks for the tests, here’s some more thoughts :

(i) Users who want # Headings hierarchy can use that exclusively.

there is a current workaround for this : 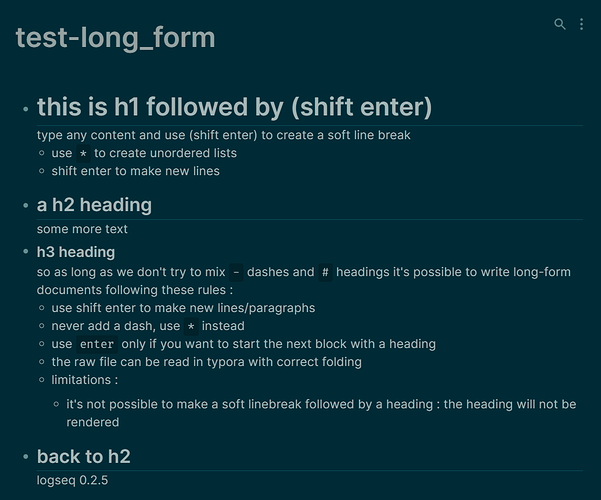 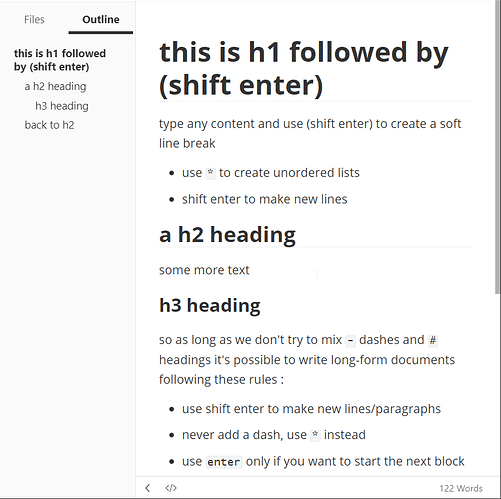 so in a way it’s already possible to do long-form writing in logseq as long as we replace - with *.
the limitation being that in logseq, the H1 will not fold the sub-sections in the example above, which is what @pihentagy requested.
but I wonder how useful that is : if the main use case is to create and view the doc inside logseq, then why not use classic bullets ? if the goal is to create in logseq and view elsewhere, than does it really matter to fold the h1 inside logseq ?

? if the goal is to create in logseq and view elsewhere, than does it really matter to fold the h1 inside logseq ?

If the goal is to create in logseq and view elsewhere, then does it really matter that using a - will create a new block? The generated/stored MD file will have the - in the same place as if it hadn’t created a new block. Also Logseq enter & backspace key combo does transparently create block & merge it back together.

Logseq propensity of turning # into - # without any notice or visibilty is still an issue though. That - # is not recognized as a heading in some other Markdown editors even though Github GFM Example 278 does.

H1 will not fold the sub-sections in the example above, which is what @pihentagy requested.

Actually it does (somewhat). You can click on the triangle next to the bullet for this is h1 followed by (shift enter) and Logseq will hide the rest of that block (text and * list items). Yes, it doesn’t automatically collapse subsidiary h2 and h3 headings (because Logseq 0.2.5 treats all # headings as being at the same top-level).

It would be very much like to be able to partition items that have a certain “mental distance” to each other with some spacing:

At least this use case is possible with the new version 0.2.7

Empty blocks no longer show the bullet point. For me this is a minimal but very useful change.

a minimal but very useful change

Yep, that v0.2.7 new feature for separating blocks with empty spacing is nice (no block bullets on emply blocks). I’ll likely use more of it. On making the empty block as child block instead of sibling block give different visual impact, also nice.

I was separating blocks using --- HR block with custom CSS to centre it on the block bullet, hr { margin: 0.8em; }.

I have noticed some inconsistencies in how LogSeq is treating headers in recent releases and documented them here Headers rendered inconsistently in markdown.

I would suggest that the bullet is only removed from headers that are not indented AND do not have indented children. In all other cases the bullet should remain. That should satisfy users that want free format text and those that want to use the outline style.