Is there a way for me to currently use Logseq via mobile and desktop?

I’m storing my local files in Dropbox, can I access them via mobile through the Brave browser or something?

Or can I use github sync with the desktop app and in a mobile browser?

Yes, you can use the GitHub desktop app to add and push your local files (in Dropbox) to Github, and login with GitHub in the mobile browser, add your repo should be working.

Let me know if it doesn’t work.

I had some trouble trying to get it working with Dropbox. Github desktop kept giving me errors. I started over a few times, but ran into the same problems.

Once I moved my files to my desktop it’s working fine, so I’m just going to stick with that for now.

Got it. Do you remember the errors with the Github desktop?

Hey @Sarah_Arminta awesome to see you here hahaha. I literally just created an account and your post was the first to show, ironically I was gonna ask suggestions on the same topic.

Regarding using it in mobile. I did a few tests as well for using it with my phone.

my workaround for quick capture

Because I really like the local folder set-up in my laptop. I might see if it’d be better to just create an separate private github repo for quick inbox notes (to use in my phone). Which I can later move to my local folder manually.

Of course it’d be nicer to be able to have a local folder as well as the github repo to use with mobile, but after testing it a lot, I found it added a lot of complexity.

Would love to know if anyone else has a better workflow

My goal would be to have a local folder but also access to mobile.
I wan’t to avoid having to pull and push fro git every time to avoid conflicts.

I also saw that there are better Dropbox integrations in the way, so I might wait for that to sync my local folder with mobile in a smoother way, but I’m open to suggestions

I will wait for release a mobile version of Logseq.

This is huge motivation for me to buy a smartphone, which I tried extremely hard to avoid using it in the past.

I get you, I also have that conflict since I don’t like using my phone (due to it being a huge distraction) but also for things like this it’s a great way to quickly input ideas and quick to-do’s.

It’d be awesome to have a mobile phone indeed!

Here is the error: 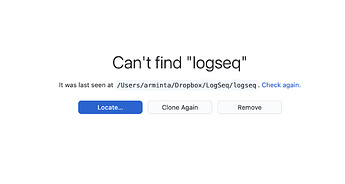 No matter what I did or if I deleted everything and started over I couldn’t get past this.

I totally agree with this topic. Local storage (not Github) for Logseq is one of best points function but it’s hard to use it both mobile and desktop. Let me wait use Logseq until improve this feature.

Here’s my current workaround for mobile:
Basically I’m using git as a dropbox replacement to sync my local folder with my phone.
I have a cronjob(automation thing on linux) running that tells git to pull/push every minute - there’s definitely ways to do this on any OS.

On my phone I’m using gitjournal,which sadly doesn’t support all of logseqs features(and logseqs headings look quite messy) but it has git syncing built in, supports [[wikilinks]], backlinks and embedded images and it’s enough to review notes or quickly capture ideas.

One important thing is to use the raw editor and turn off yaml headers in gitjournal, otherwise your files might look messed up in logseq.
Often times I don’t bother adding all of the headings on mobile and instead hit enter in logseq a few times when back at my computer, so it’s definitely not perfect but at least the syncing is working quite well.

Any improvements to this?
Is there an alternative to using git for editing my journal files on mobile?
(Spent hours trying to get mine working smoothly- but I give up )

Obsidian Mobile is now officially released for everyone. You can get it at https://obsidian.md/mobile

Here are my instructions for setting up Logseq to work with Obsidian.