Is the ability to reference/embed a block a killer feature?

I understand that for me, only I will be able to answer this question, but I wanted to hear what others have to say. Currently, I use org-roam in emacs, and that was going nicely. After discovering logseq I’ve taken the journal based approach in org-roam, that is, whenever I have a note/thought on something while I’m reading, I’ll write it down on the journal page. And at the end of the day/week I’ll make actual, separate notes.

So org-roam doesn’t have the ability to reference/embed individual blocks (I know org-transclusion exists, but that seems to embed entire notes only), but logseq does. When I’m making a new note, sometimes it just seems too cumbersome to write it from scratch but just reference the stuff I have in the journal page, which logseq lets me do. In contrast, in org-roam, I either have to write it from scratch, or copy/paste.

So I was wondering, for people who made the move to logseq or the like, do you think the block referencing feature is really useful? Similarly, for the people who moved on to something that doesn’t have this feature, do you miss it?

One nitpick I might have with this functionality is, I heard that you’re supposed to give some thought to individual notes, which you do not/might not give to the text you write in journal pages. So by referencing a block from a journal page, aren’t you somewhat defeating the purpose?

So the second use case I could come up with, is referencing blocks from other separate notes, e.g. in a note titled ‘Potential Energy’, I might want to reference a block from ‘Conservative Fields’, rather than just linking the note. I don’t see much use in this, although I want to know about examples from people who do make use of it.

Yes, this is a game-changer, but it needs time to sink in. Now I use it all the time.

Opinion: Copy-pasting (in your own notes) is a bad practice left over from inferior editors.

Logseq helps to create reusable, well-defined blocks of information. Those blocks work like (magical) lego: create in one place, use everywhere. This helps linking notes, which in turn helps to think about ideas outside of their initial context. That, in turn, aids in developing understanding and creativity.

Workflow: I start everything in the journal. Some of the blocks I write in a journal-page might be good enough to use in other places. I usually create block refs, ut sometimes block embeds (the latter if it’s more than one block)

Notes that are good enough they deserve a title (which makes it easier to link to them), get promoted to pages (block to page plugin). And here comes the killer feature: the individual blocks don’t change, just their location changes. The blocks don’t care, Logseq doesn’t care. The links don’t break! (technically, the block-id stays the same)

This is what differs Logseq from most other implementations. Usually blocks are related to a specific location (or page), in Logseq every block has an ID. As soon as a block has a link, the ID is frozen. From then on you can continue to refer to that block, no matter where it is located.

About the nitpick, giving thought to a note doesn’t mean it never changes. A healthy graph is always in flux. Key is being able to find the relevant information when you need it.

About the nitpick, giving thought to a note doesn’t mean it never changes. A healthy graph is always in flux. Key is being able to find the relevant information when you need it.

Can you explain this? I mean, I don’t disagree, but what does it have to do with my concern?
Are you saying that, it’s ok to reference a block that was written poorly, since you can always change it later on?

you’re supposed to give some thought to individual notes, which you do not/might not give to the text you write in journal pages. So by referencing a block from a journal page, aren’t you somewhat defeating the purpose?

If I read you right, you’re concerned that by block-referencing the journal, you’re referencing a block that’s not up to snuff. And that makes block referencing, or using blocks from the journal “defeating the purpose”.

But you also wrote

In contrast, in org-roam , I either have to write it from scratch, or copy/paste.

Would block-referencing make things worse, or better? It depends. Block-referencing is better then copy/paste, because it is easier, you have exactly the correct block, you have the same data (like a copy), but you can also jump back, so you preserve the previous context as well.

Rewriting a block is better than just block-referencing, if you improve on the original. But even better is (imho) having both the block-reference, and the improved version. Or, if you want to, you just improve the original linked reference.

Block references do not do the work for you, you still have to improve the note yourself, it just gives you more tools to work with.

But even better is (imho) having both the block-reference, and the improved version.

Wouldn’t this clutter the note though? Or do you keep all (obsolete) block references at the end?

Keeping an obsolete block reference is useless (by definition), but keeping evolving ideas around is good (I think), I just fold everything useful under a thumbnail

Under the fleeting note is all kinds of cruft, maybe I’ll never look at it again, maybe I will: 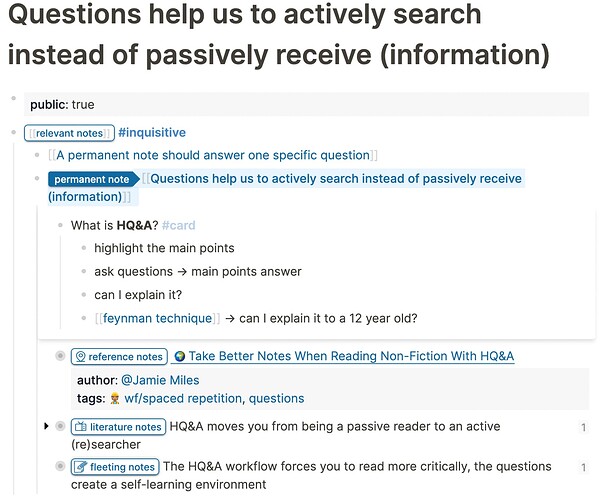