Making the biggest node in the graph to be the one with most links going out of it doesn’t make any sense to me whatsoever.I don’t like the current Node Structure or file structure system available and want additions, to make my files more organized and easier to access.

Therefore i’ll address the solutions i can think of:
The main idea is that everything is hierarchical as presented in this mindmap, the graph is directed and not undirected,as the math links to algebra and not the other way around. 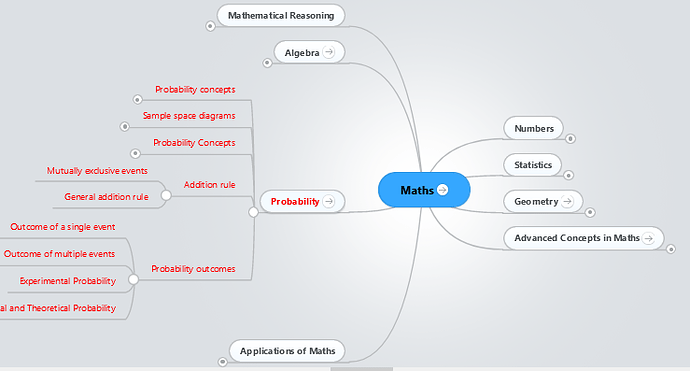 assumming Maths document has [[Algebra]],[[Numbers]]…
Making the unlinked top level Documents by default.
Now every new document is either on equal level or smaller or bigger than Maths.
By default all documents created from Maths would be it’s subtopics, unless they are subtopics of another Field/Document such as Physics for examle then they would be by default relating to that topic alone and not included in the hierarchy of Maths. a suggestion can be added to make it a subtopic of math as well.

in case a smaller Topic links to math and makes a circular link. whilst linking, a suggestion can me made [[Maths->General addition rule]] for example to indicate that math is bigger in the hierarchy.

another example
if Algebra wants to link [[Probability]], either it already had a parent which is math, so it won’t assume that Algebra is the parent and keep the original parent. if It’s a new document didn’t exist before, then Equality can be used to know that probability is a subtopic of math, or force parent then Probability will have two parents which are Maths and Algebra.
now how they would look:
1)i’d like the usual Folder structure view:
Topic1
–SubTopic1
–SubTopic2
Topic2
–Subtopic
2)making the topic highest in the hierarchy the biggest in the graph-view as well as center it.