Ability to select a block as "ground level" on a page

I’ll try to explain the best I can my idea.

That would allow both for

I’ve tried to make mockups to explain better (sorry, Mockups made with Athens) :

This is a test page in, standard view, where a bullet could be defined as “ground level” 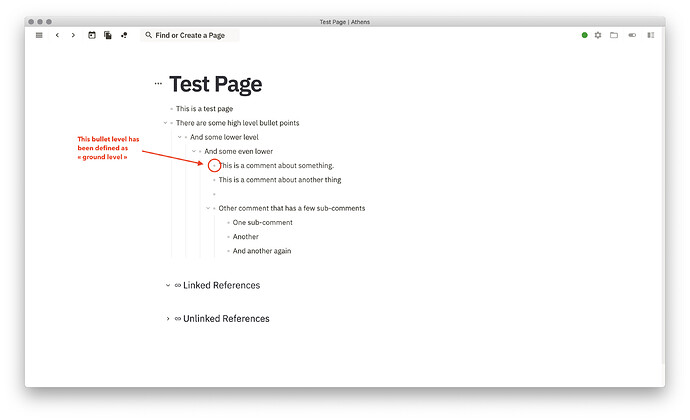 This is how that same page would look when exported to .md 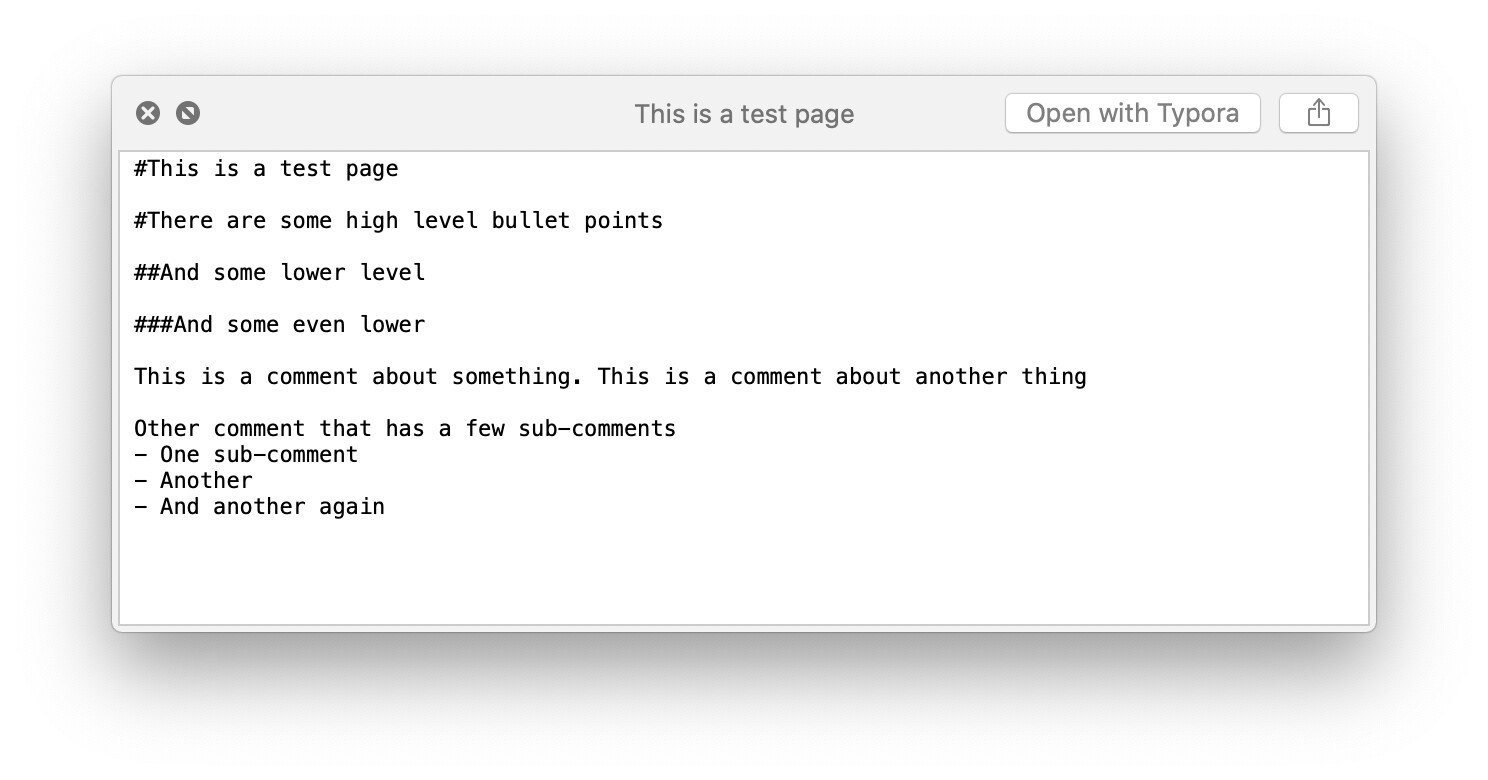 This is how that same page would look in “document mode” 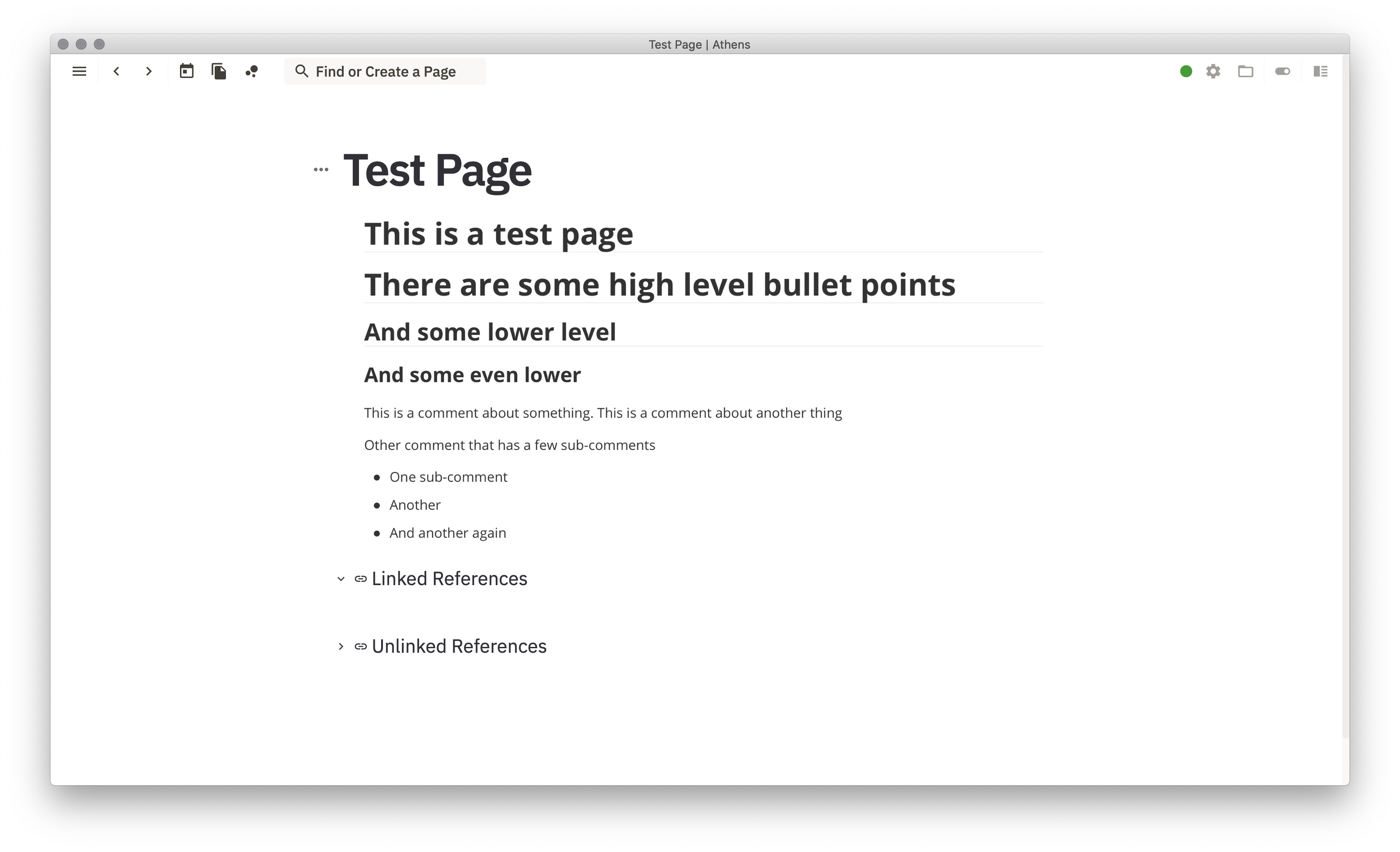 Hey @Limezy I just posted on this thread which seems to address your issue, but is more active: Allow non-outline (freeform) text

Perhaps you want to join in there?

With recent version of Logseq (currrent 0.2.5) you can mix # headings and - bullets within a Markdown file like the following example. It might do near enough to what you want. In this case “ground level” is the page, if I understand correctly what you meant. Raw markdown text below, Logseq screenshot further below. 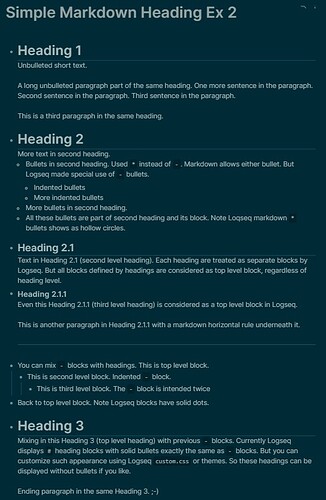 Thanks! That is interesting…

I noticed that if the first thing I type on a new note is a h1, and do not move any blocks (i.e. headings) then indeed, everything stays ‘free form’.

Still, a bit fragile and awkward, but good to know

Hmm, tried that without success

It works on a new-line/block, but doesn’t appear to revert a heading that’s already become hyphenated.

If you use /h1 command on a second level (or lower) - blocks it won’t make it a heading block. It’ll make it a - # block that have the size formatting of the h1 heading. This - # markup is a markdown extension that works the same in stackoverflow or github (my goto test sites for “standard” markdown).

Just checked - # on github, which gives a bulleted, h1 header

This is indeed expected behavior of Commonmark and (therefore) GFM (Checking those specs, you clearly see GFM is a superset of Commonmark, which I agree with you, represent the closest thing to ‘standard’ markdown)

So far, this all makes sense. However ,Logseq, in comparison, shows no visual difference between # this and - # this, in contrast to every parser known to Babelmark 2

This behavior obscures the raw text, and departs from markdown interpretation everywhere else. I re-read your explanation of how/why Logseq handles blocks the way it does. I appreciate it’s complicate thing Logseq is trying to do, and I realize I’m not putting forward any easy solutions

However ,Logseq, in comparison, shows no visual difference between # this and - # this

One way is to use a special bullet for # headings block. Perhaps something like ■ square bullet or similar. Logseq UI/UX does depend on the bullet for each block. I understand we could even do this ourselves using custom.css, just as we could make the bullets for # headings to be transparent.

[edit:] Seems I couldn’t (yet) find custom.css that could restyle # heading bullets to ■.

Just had a look in ‘dev tools’ ctrl + shift + i (which interestingly doesn’t appear in shortcuts, ‘customize shortcuts’ or here) and I couldn’t see any markup difference between the two

Indeed I couldn’t find <ul> or <li> anywhere on the page!