See screenshots of the bug in action for reference.

I have since 0.8.14 been experiencing a very annoying bug where Logseq will suddenly announce a ‘write file’ error – an Ebusy error. Often when that happens, what I’ve just been typing vanishes and I have to retype it again… as though Logseq was pulling in the latest disk version which is a few seconds older than what I’m typing. 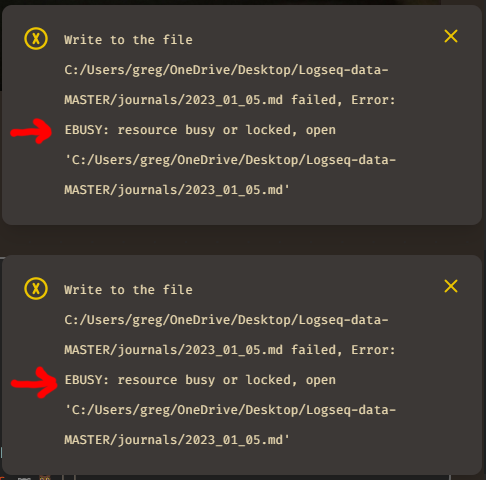 Then, at times it will escalate and present not only the error messages, but also prompt me to choose between the “file version” and the “Logseq version” (presumably in memory). Invariably, the Logseq version is the most recent. 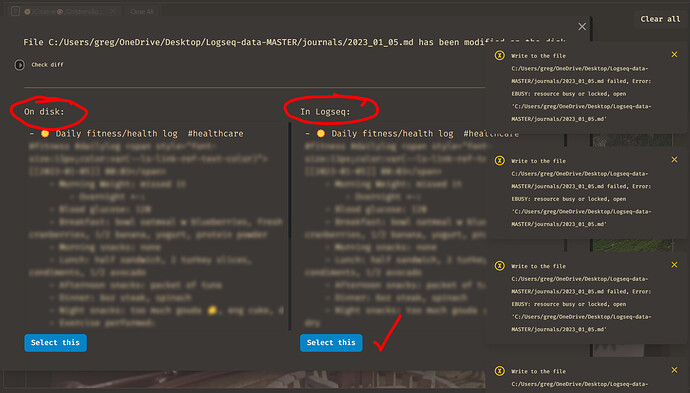 I’ve set about troubleshooting this.

I am using OneDrive. However, I’ve experimented with terminating OneDrive , yet same problem persists. And, on top of that, I’ve also turned off file Indexing (Windows) just in case. Even with both OneDrive and Indexing taken out of the equation, I still get the same issues, though perhaps a little less frequently, though still once every 5-10 minutes.

Has anyone else been experiencing this issue? Quite a pain.

UPDATE:
I may have solved the problem described. Will monitor over the next days, but so far appears good.

First, just to be safe, I moved my Logseq folder out of any OneDrive sync space. In other words, I relocated to a place that is not synced by OneDrive.

I was still getting some Ebusy errors, but not as many.

Then I realized that I had another app (AutoVer) that runs in the background and creates timestamped backups of any file changes that happen in the Logseq folder. So, first I disabled that app, and the Ebusy’s seemed to stop.

Then, after several hours I reenabled AutoVer and changed it to NOT do immediate backup with every change every minute, but instead to delay updating by several minutes. So far, I have not had any Ebusy errors as before.

I will update this once I’m convinced I’ve solved it.

The changes I made (described above) seem to have eliminated the Ebusy issues.

Frustrating bug where text disappears and reappears while typing