I think using folders for namespaces works, even if it means some folders have 0 or only a few files, but contain folders that have more files in them.

It might seem weird but it’s still an organic way to browse files/folders and should make organizing namespaces easier.

Interestingly, your proposed solution is similar to current method used by Breadcrumbs plugin to enable custom hierarchy for notes in Obsidian

Having a folder structure as well as parent links would be very useful. I’d rather the children property was optional though. I might have many children in a folder and wouldn’t necessarily want them all listed as a property. Presumably you could find them in the backlinks though. In an ideal world I’d like a file manager tool built in which would let me move a file and have all the corresponding properties, links etc automatically updated.

Thank you for this suggestion @Bad3r, and for those upvoting this.

I’ll put an update in this topic once I know more about how and when we’re going to tackle this.

What about only creating folders for namespaces in the middle, like this:

It should be cleaner than the original structure.

Problem: If someone used .md in the middle of the path, like foo.md/bar, we would be creating a folder called foo.md (the file will be foo.md/bar.md), which has the same name as a page named simply foo.

Solution: We can add .d in the name of every folder to indicate it’s a directory instead of a file, so the file path becomes foo.md.d/bar.md and does not interfere with other paths.

I think this is an important feature. I have about 1000 pages (more or less) in my OneNote. I’m exporting them now as a tree of .md files using alxnbl’s OneNote MD Exporter, and it would be great to just copy them straight into Logseq without having to run a fancy script over them to create “namespaced” filenames and add the title metadata.

Another idea on this:

While on a page, say “Areas/Personal”, it would be cool to be able to directly add a child page in the hierarchy from that page. 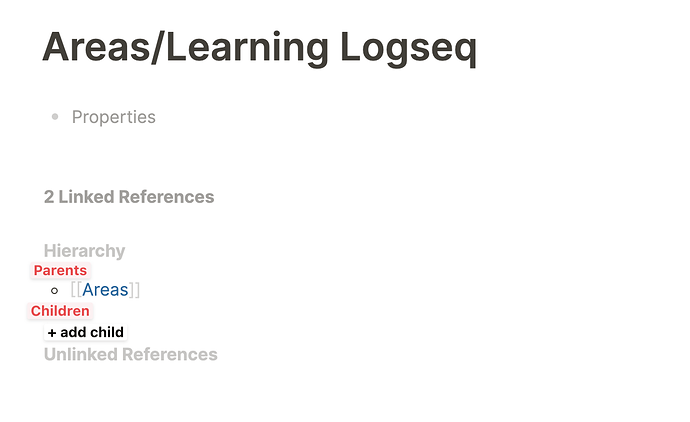 As well, I’d love to be able to toggle how namespaces display — in Roam, you can toggle between:

Found the post for that request: Collapse namespace prefixes - #10 by brandontoner

My main usecase for having subdirectories as namespaces is the possibility of having different repos for each of them which I can share with different people. Me and my wife can share a repo “home”. My brother can be in a repo “family” with me and my wife. And I can have a repo for work related things which I would share with coworkers.

The filename limit can be disabled, as far as I know.

Using folders for namespaces has advantages, but also disadvantages: One of the big benefits of namespaces in the filename is that you don’t have to click through a bunch of folders to find files. Of course, this wouldn’t be an issue inside Logseq, but could be a problem for other files.

Internal links, too: the file [[foo.bar.banger]] having a link to [[music.ohno.rickroll]] is easy to parse more or less regardless of the app used. Folders would necessitate hard file path based links.

Just adding that besides overcoming the limit and making it easier to share only parts of a graph, it could open up logseq to automatically regonize new files inside folders properly in the hierarchy

That would enhance the crosscompatibility and usecases of using logseq alongside other apps, from markdown based to pretty much anything really.
For example i could right now hardlink some md file from elsewhere into a logseq subfolder and - if/when hierarquies work through folders- it would already be ‘where it should’ inside logseq

I think that, if we had to choose only 1 way folders would outweight namespaces

Proposed way for having both methods:

Some other cases to keep in mind:

In the end, this structure could even be used for navigation as an alternative to the graph.

A subfolder hierarchy would be extremely appreciated rater than the parent%20child%20subchild.md file naming we currently have.

I don’t see a point of having a single folder with everything in it.

I would also like to see subfolders, for the following technical reasons:

On the other hand, I don’t think subfolders hierarchies are a good way to make information accessible, because one easily runs into many problems, as discussed in an article.

I just wrote a feature request for hierarchical tags, which have many advantages over subfolders, including the ability for one item to be part of multiple hierarchies and no limit on the path length or nesting limit.

From that point of view, I think the subfolder system should be optimized so that the storage issues (no long pathnames and not too many files in one folder) are addressed first, and it should be kept simple enough to make interfacing with external programs easy. If folders serve as an extra tool for organization - that is great, but I wouldn’t sacrifice speed and stability.

Calibre let’s one pick different export formats to convert the internal folder structure, such as {author_sort}/{title}/{title} - {authors}. Logseq could also maintain a set of hardlinks to present a different view for external programs.

In addition to all these good suggestions, Aryan’s overview on the usage of namespaces was hugely helpful to me.